This will appear in in the Securitisation & Structured Finance Handbook 2022 this August.

After almost four decades of use, the London Interbank Offered Rate (LIBOR) is coming to a long-planned and much anticipated end. With approximately $400 trillion in financial contracts linked to LIBOR globally, and the United States accounting for over half of that amount, the mid-2023 final cessation date for the most widely used USD tenors presents significant risks across the financial markets, impacting consumer and business borrowers, lenders, investors, banks, and other market participants. Market participants and regulators have worked hard to get to this point, with much progress made.

In the United States, numerous retail financial products calculate interest based on LIBOR rates: floating rate mortgages, student loans, even bond investments in traditional 401k or pensions plans. Similarly, LIBOR is also used as the benchmark for floating rate business loans, lines of credit, securities and interest rate hedges. In fact, for more than 30 years, almost every consumer and business floating rate financial product has been tied to LIBOR. An estimated $223 trillion in financial contracts had exposure to LIBOR at the end of 2020. While 67% of current exposure is expected to roll off before the mid-2023 LIBOR cessation date, an estimated $73.1 trillion LIBOR contracts – known as legacy LIBOR — will remain outstanding. Interestingly, unlike the other LIBOR-linked financial instruments, where 58-68% of those contracts maturing prior to mid-2023, nearly all of the LIBOR-linked securitized bonds will still be outstanding in 2023 as these are backed by longer-dated student loans and mortgage loans.

USD LIBOR Footprint by Asset Class (as of December 2020) 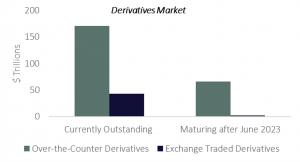 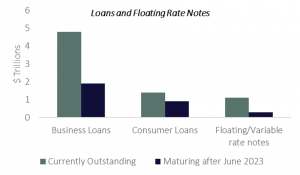 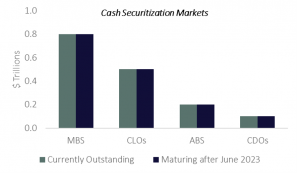 Industry experts, global regulators and the U.S. Federal Reserve have been working for nearly a decade to transition away from LIBOR including developing robust alternative reference rates. Significant progress has been made. In July 2017, the UK Financial Conduct Authority (FCA) announced its intention that it would no longer be necessary to persuade, or compel, banks to submit to LIBOR after December 31, 2021. Following the FCA’s announcement, the Secured Overnight Financing Rate, or SOFR, was identified and endorsed as the recommended alternative to LIBOR by the U.S. Federal Reserve-sponsored Alternative Reference Rates Committee (ARRC). SOFR is published daily by the Federal Reserve Bank of New York and represents the interbank overnight lending rate collateralized by Treasury securities. In February 2020, the Federal Reserve Bank of New York began publishing 30-, 90- and 180-day SOFR averages as well as a SOFR index, further strengthening adoption of the replacement rate.

Adoption of SOFR in the derivatives market has also begun strengthening. Global issuance of SOFR-reference debt has exceeded $250 billion, with the Federal Home Loan Bank System accounting for more than half of that issuance.  Issuance of SOFR debt by large multinational banks and community banks has also been accelerating. SOFR options have been trading and futures activity continues to increase. A strong positive development in this space has been the U.S. Treasury’s consideration to issue SOFR-indexed floating-rate notes, a product that would be very attractive to buyers of high quality short-term debt and directly drive liquidity in SOFR-based markets.

Major milestones were achieved in late 2020 and early 2021, facilitating new-issue SOFR activity in the cash market. In 2020, the ARRC published conventions for the use of SOFR in floating rate notes, adjustable-rate mortgages, business loans, and student loans. Then in March 2021, the ARRC, led by SFA as a co-chair of the ARRC Securitization Working Group, published conventions around new-issue ABS, MBS and CMBS markets.

Further guidance and clarity in these products were well received. Issuance of floating rate notes tied to SOFR has steadily grown and passed the $1 trillion mark in April 2021. SOFR-based securitizations, which began in fourth quarter 2019, has grown to $40 billion. Freddie Mac’s K shelf, the federal agency’s CMBS platform backed by multifamily loans, account for 56% of issuance to date. In May 2021, OneMain issued the first ever SOFR-linked ABS in the U.S.  With the OneMain deal setting an example and U.S. regulators signaling no new LIBOR issuance should occur after the end of 2021, we expect more ABS offerings to quickly follow. 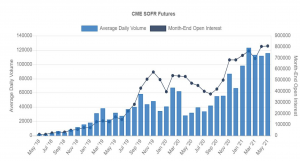 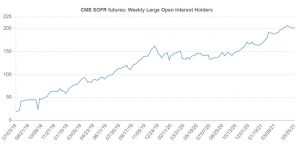 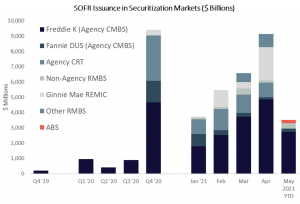 While the new-issue SOFR market continues to move forward, challenges remain with legacy LIBOR contracts that were entered into before LIBOR end was announced. Many of these are floating rate bond contracts that do not specify what rate the contract would fall back to in the absence of LIBOR. Of the $73 trillion legacy LIBOR contracts expiring after the mid-2023 cessation date, there are roughly $16 trillion where no fallback language exists. These contracts – often called “tough legacy” LIBOR – pose an enormous risk to the financial system and the underlying borrowers, investors and banks.  “Tough legacy” contracts often have very high legal and operational hurdles to changes in their terms, not the least of which is identifying, contacting and negotiating with the large number of contractual parties who must unanimously consent to any amendment. The challenge is heightened for securitization products keen on avoiding basis risk, which arises from a mismatch between the reference rate on the underlying loan assets and the coupon paid by the bonds.

The State of New York recently took an important step by enacting a LIBOR transition law. The new law addresses New York-based legacy contracts that are silent on the replacement rate or do not include fallback language other than LIBOR and provides safe harbor legal protection to all contractual parties.

New York has taken action, but it would be unfair if some states’ consumers, businesses, and bond investors receive safe harbor protection and others not. As a result, draft legislation has been introduced in Congress that creates a safe harbor and allows for consistent treatment for all borrowers, investors, and lenders. The proposed legislation would require the use of the benchmark replacement rate recommended by the Federal Reserve where the contract language is silent, or the contract’s fallback provisions prescribe the use of LIBOR.

Global financial markets are at a critical moment in retiring LIBOR. Consumers and investors need absolute certainty as it relates to rates and products on which so many contracts rely. In the U.S., only Congress has the power to ensure an economically neutral outcome without years of confusing and costly litigation. Federal legislation for all LIBOR -based contracts is the best way to have this saga end well for all.