With every new Congress comes a game of musical chairs in Congressional Committees and Subcommittees as Member seniority, popularity, jockeying for specific assignments, and the number of seats given to the majority and minority come into play. There is a domino effect that results from the shuffling of Members’ assignments on all Committees since House rules dictate that Members can only hold one gavel at a time.

Below we outline some considerations, working under the assumption that Democrats will retain control of the House, that will impact who serves as Subcommittee Chairs in the first session of the 117th Congress.

Democrats
The battle to replace Rep. Elliot Engel (NY-16) as Chair of Foreign Affairs pits two HFSC Subcommittee Chairs against each other, Representative Brad Sherman (CA-30) and Representative Gregory Meeks (NY-5). While Sherman technically retains seniority over Meeks, either could win the race. If Meeks wins the Foreign Affairs race, he will vacate his Financial Institutions Subcommittee gavel. If Sherman wins the race, he would similarly have to give up the Capital Markets gavel. Additionally, Rep. Lacy Clay’s (MO-1) primary loss opens the Housing and Insurance gavel.

The subcommittee chair domino effect caused by the Housing and Insurance vacancy and likely Capital Markets or Financial Institutions vacancy will be determined by a series of variables and the below chart is subject to change. Variables include: 1) Will these Members win reelection? 2) Will the seniority system still be in place? 3) What subcommittees will Members be offered on other committees and will they give those up for a House Financial Services Committee (HFSC) gavel? 4) Will the FinTech and Artificial Intelligence Task Forces continue to exist? And if so, in what form?

Assuming the seniority system remains in place, the domino effect of other committees’ subcommittee gavel races will influence the HFSC subcommittee breakdown. For example, in the past Rep. David Scott (GA-13) has chosen a gavel at the Agriculture Committee and foregone one at HFSC. If the Capital Markets gavel were to become available (i.e. Sherman wins the Foreign Affairs race), Rep. Scott may reverse course and choose the HFSC gavel.

The FinTech and Artificial Intelligence Task Forces are authorized through the end of 2020, however their fate beyond that is unknown. When then-Chairman Hensarling created the Terrorism and Illicit Finance Task Force, it was the first step in creating a new subcommittee (since merged with the National Security, International Development, and Monetary Policy Subcommittee). If history is a guide, the Task Forces could either be merged into one subcommittee or adopted as two standalone subcommittees. That being said, there has been speculation that the novelty of these issues may wear off as the lines between technology and financial services become further blurred and the Task Forces’ jurisdiction (which already bleeds into the established subcommittees), could be absorbed into the other subcommittees. While speculative, at this point the most likely course seems to be reauthorizing the Task Forces for an additional Congress before deciding their long-term fate.

Balancing the variables laid out above – and with caveats for the high degree of uncertainty this far out from the election – the HFSC subcommittee gavels could look like this in the 117th Congress:

Republicans
Republicans should not have much change in the Ranking Members for each subcommittee. The only potential change on the Committee will be the addition of new members given the primary losses of Rep. Denver Riggleman (VA-5) and Rep. Scott Tipton (CO-3). It is possible that one or more additional Republicans could lose, though current polling suggests that they are all in fairly safe seats. Rep. Ann Wagner (MO-2) and Rep. Lee Zeldin (NY-1) are considered the most endangered at this point. Additionally, Members may move to other committees, such as Rep. David Kustoff (TN-8) who has been looking to join the Ways and Means Committee. Some of the names that have been thrown around as replacements are Rep. Dan Meuser (PA-9) and Ralph Norman (SC-5). However, if Republicans lose more seats in the House it is possible that there will be no Republican additions to the committee since committee numbers are based on the overall majority/minority House ratios. 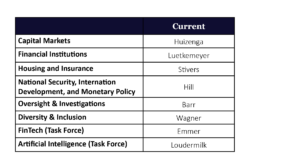 The election is only 46 days away and a lot can change between now and November 3rd. SFA will keep a close eye on election results and how they will impact who holds Subcommittee gavels come January 2021.